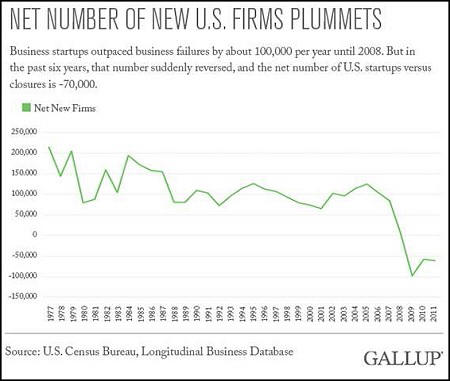 Clifton has a theory on why America’s crisis in creating new businesses is a well-kept secret. He writes:

“My hunch is that no one talks about the birth and death rates of American business because Wall Street and the White House, no matter which party occupies the latter, are two gigantic institutions of persuasion. The White House needs to keep you in the game because their political party needs your vote. Wall Street needs the stock market to boom, even if that boom is fueled by illusion.”

A key function of Wall Street is to bring promising new companies to market to ensure that the U.S. remains competitive in new industries and good jobs and innovation. This process is called Initial Public Offerings or IPOs. But the nation was put on notice as far back as 2001 that Wall Street was more snake oil salesman than the locomotive for new business launches. The largest investment banks were calling the startups they were peddling to the public on the Nasdaq stock market “dogs” and “crap” behind closed doors while lauding their virtues in publicly released “research” announcements.