WE HAVE CONFIRMATION – Greenspan’s Gold Forecast Concurs With Chart Analysis

The highlight for the always great New Orleans investment conference last month was Allan Greenspan. He was special.

One key moment was when he was asked about gold. He said gold is a good place to put your money these days as its value as a currency sits outside of government policies.

When asked where it will be in 5 years, he said “higher.” By how much, he replied “measurably.”

We have to say that gold on a big picture basis is saying the same thing Allen Greenspan is suggesting. And it shows why central banks are buying physical gold and wanting to keep it in their home country.

Eventually gold is going higher. And if you ask, what will gold be doing two years from now? We’d say, it’s more likely to be on an upward path.

The following chart shows gold has phases, and impressively they continue to work. This reinforces that gold is a cyclical market. 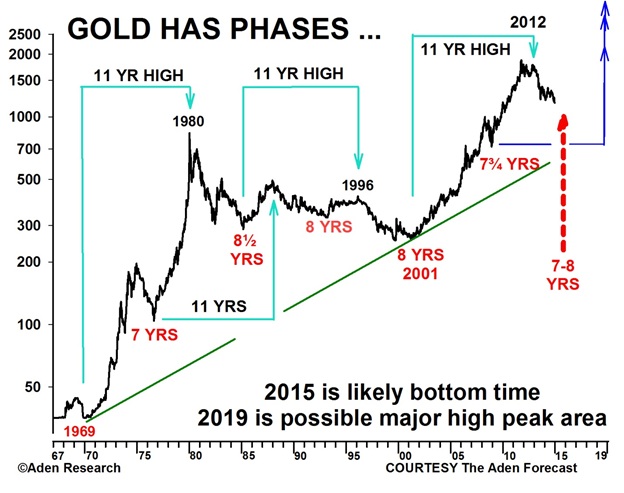 The 7-8 year low areas are in red. Nov 2008 was the last low time at the 7¾ year mark, which was the 5th time since 1969. We’ll now see if this time period going forward identifies the next low for gold.

If so, the next likely time could be as early as this month of November. But taking the more likely average, it could be next Summer and up to November 2015. On the unusually long side, it could happen during the first quarter 2016.

The point is, the cyclically low time period is getting closer.

More exciting is what happens next. Once the low is clearly established, gold will have a green light to rise in a strong bull market.

This tells us that despite current volatility, with today’s world in an unprecedented condition, we’ll likely see gold at super new record highs in the years ahead.