U.S. Gold Exports Jump 70% In September – US Determined to Impoverish Itself with Paper Money

From the SRSRocco Report:

This was probably due to increased demand as the price of gold declined $80 during the month.

U.S. exports started off very strong in January, reaching 80 mt (metric tons) with the majority heading to Hong Kong. However, gold exports fell to 47 metric in February and dropped even further in March at 30 mt. If we look at the chart below, U.S. gold exports continue to remain weak from April to August until the spike up in September: 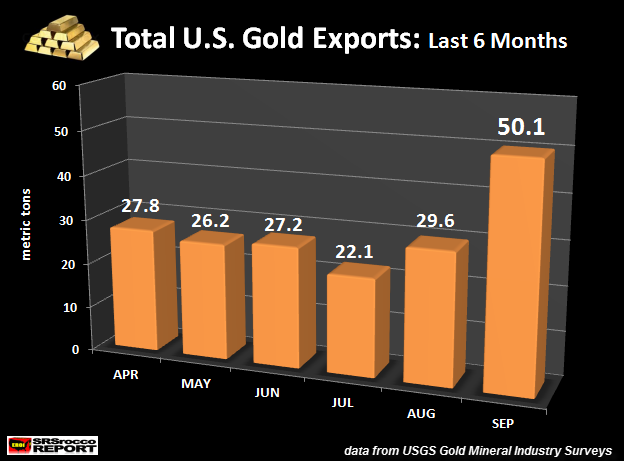 Print a Coupon for Fortify™ Probiotics

As we can see, total gold exports for each month were less than 30 mt. However, when the price of gold fell to a new low, gold exports increased to 50 mt. The majority of gold exports in September were shipped to Switzerland, the U.K. and Hong Kong: 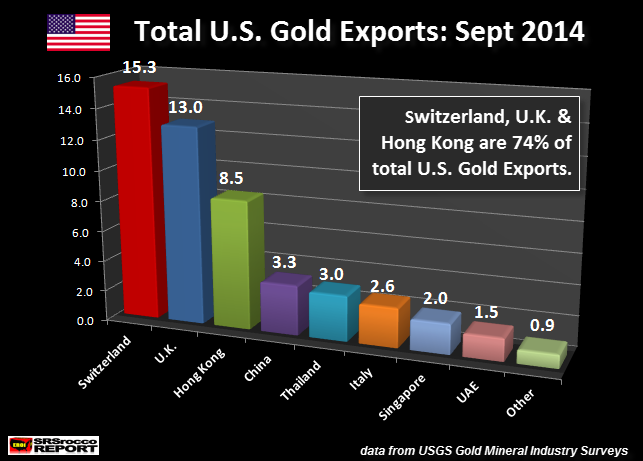 China also received a direct shipment of 3.3 mt of gold while Thailand imported 3 mt, Italy 2.6 mt, Singapore 2 mt, and the UAE 1.5 mt. What is interesting here is the 2.6 mt of U.S. gold exported to Italy. Italy has imported gold scrap from the U.S., but not much in the way of gold bullion.

Matter-a-fact, I went back and looked at the past ten years of USGS Gold Yearbooks and only found one entry listing U.S. gold bullion exports to Italy in 2009 at a paltry 21 kilograms, which is 653 troy ounces. Compare that to the 2.6 mt or 83,590 troy ounces of gold exported to Italy in September.