John Hussman can generally be counted on for a bearish take on the stock market. But his latest weekly commentary letter is a doozy, with some particularly pointed remarks aimed at investors who continue to believe valuations are fair in stocks.

The economist runs Hussman Funds, and since the financial crisis he’s been a prominent critic of Federal Reserve policy. His investment choices are concentrated in “defensive” positions in stocks and U.S. Treasurys. And if you take a look at his writing, it’s no secret why. Here’s the money quote from the latest commentary:

“Make no mistake – this is an equity bubble, and a highly advanced one. On the most historically reliable measures, it is easily beyond 1972 and 1987, beyond 1929 and 2007, and is now within about 15% of the 2000 extreme. The main difference between the current episode and that of 2000 is that the 2000 bubble was strikingly obvious in technology, whereas the present one is diffused across all sectors in a way that makes valuations for most stocks actually worse than in 2000. “

Hussman couches his bubble call in references to the cyclically-adjusted price to equity ratio pioneered by economist Robert Shiller, as well as the ratio of nonfinancial market capitalization to GDP (below). MarketWatch’s Brett Arends has some more on his investing methodology. 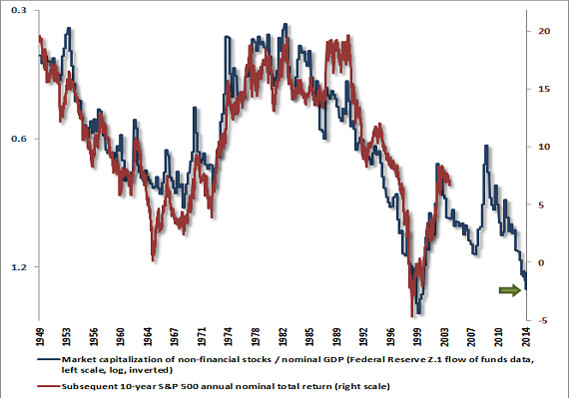 Given what Hussman sees to be such stretched valuations in stocks, he writes, “My sense is that investors have indeed abandoned basic arithmetic here.”

And here’s where the Fed comes in. Investors are willing to abandon what some simple math might otherwise make obvious due to the role of the central bank in the markets. He writes:

“The simple fact is that the primary driver of the market here is not valuation, or even fundamentals, but perception. The perception is that somehow the Federal Reserve has the power to keep the stock market in suspended and even diagonally advancing animation, and that zero interest rates offer “no choice” but to hold equities. Be careful here. What’s actually true is that the Fed has now created $4 trillion of idle currency and bank reserves that must be held by someone, and because investors perceive risky assets as having no risk, they have been willing to hold them in search of any near-term return greater than zero. What is actually true is that even an additional year of zero interest rates beyond present expectations would only be worth a roughly 4% bump to market valuations. Given the current perceptions of investors, the Federal Reserve can certainly postpone the collapse of this bubble, but only by making the eventual outcome that much worse.”

The investor adds in his commentary: “Though I’ve also always had a tendency to back away from risk too early in conditions where awful consequences have historically followed (and we’ve done a great deal of research to shorten that lead), both our bullish and bearish views have been vindicated in cycle after cycle, and were nicely reflected in our record by 2009.”