“Slowly But with Determination the Petro Dollar Comes Under Attack. I Guess Full on War with Russia is Now Inevitable.” – Jim Sinclair

Russia and Egypt might soon exclude the US dollar and use their national currencies in the settlement of accounts in bilateral trade, Russian President Vladimir Putin said in an interview to Egyptian media ahead of his Monday visit to the country.

READ MORE: Iran moves away from US dollar in foreign trade

The issue of abandoning the dollar in trade is “being actively discussed,” Putin told Al-Ahram daily newspaper ahead of his two-day trip to Egypt. The Russian president was invited for a bilateral meeting by his Egyptian counterpart Abdul Fattah al-Sisi.

“This measure will open up new prospects for trade and investment cooperation between our countries, reduce its dependence on the current trends in the world markets,”Putin said.

“I should note that we already use national currencies for trade with a number of the CIS [Commonwealth of Independent States] states, and China. This practice proves its worth; we are ready to adopt it in our relations with Egypt as well. This issue is being discussed in substance by relevant agencies of both countries.”

Egypt is a long-time and trusted partner of Russia and the relationship between the two countries has been rapidly developing, the Russian president said.

“The volume of bilateral trade has increased significantly over the past years: In 2014, it increased by almost half compared to the previous year and amounted to more than $4.5 billion,” he said urging for this trend to be strengthened. 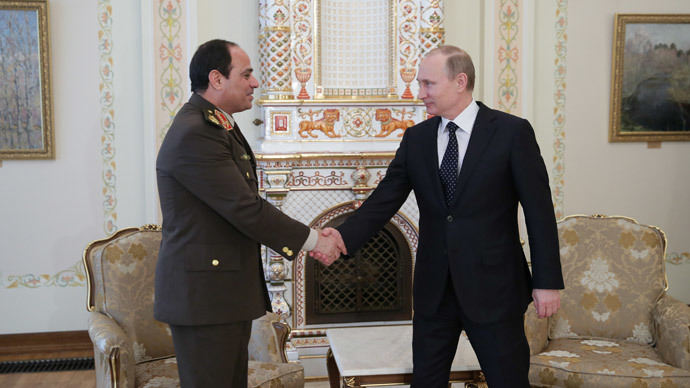