WASHINGTON (MarketWatch) — It’d be tempting to think that the days of subprime loans fueling the economy were a product of the era of the aged or departed Ace Greenberg, Alan Greenspan and Angelo Mozilo.

Except when you break down the growth in GDP, it’s clear that car and light truck purchases played a major role. And subprime loans, in turn, are financing those transactions.

In the second quarter, motor vehicle and parts spending grew an annual 17.5%. Put another way, cars made up 3.7% of all consumer spending, the highest rate since the first quarter of 2008.

Subprime loans make up about a third of new car-sales and two-thirds of used cars, according to data from Experian Automotive, at the end of last year. The New York Times, in a story about the subprime loan sector, pointed out that growth has climbed more than 130% in the five years since the crisis. 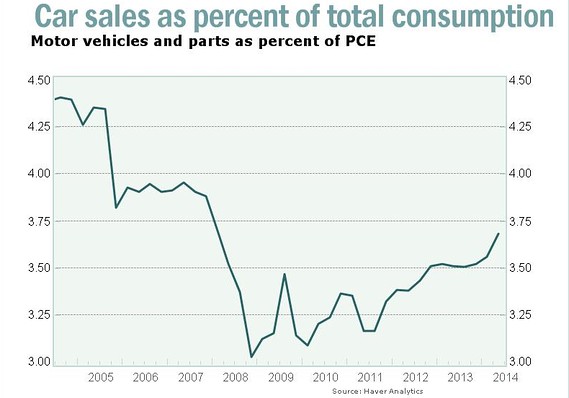 No prizes, by the way, for guessing which sector was cut out of regulation by the Consumer Financial Protection Bureau in an amendment tacked onto the Dodd-Frank bank reform law.

Ally Financial, the financing arm spun off from General Motors, insists subprime isn’t much of their business. (In the first half, 13% of their originations came from non prime or customers with no FICO scores.) But an executive noted on an investor call that, right now, you see aggressive competition in the subprime sector, particularly the “deep subprime space.” And even at Ally, the delinquency rate is beginning to rise.

True, subprime isn’t the only factor driving auto sales. The percentage of older vehicles on the road reached its highest level since 2009, according to Experian data. Some of that still reflects wary consumers scarred by the recession, though some of that may be changing consumer preferences as well. As the economy adds jobs, as consumer confidence grows, and as wage growth accelerates (possibly), that replacement cycle should be able to continue.

And it’s also worth noting the rate of default on auto loans has been pretty stable, at just under 1% in June. However, some states including Delaware and New Jersey are starting to see big rises in 60-day delinquencies.

There may well be a good argument that the risks from subprime car loans, to use the memorable word from former Federal Reserve Chairman Ben Bernanke to describe subprime mortgage loans, are “contained.” There’s no evidence that the current financial system is built on leverage to the auto market in the way it was to the housing market before that bubble burst.

But it’s also worrying the U.S. economy so quickly shifts from one area propped up by loose lending to another.