Boom: The Crashing Price Of Oil Is Going To Rip The Global Economy To Shreds

“If you were waiting for a “black swan event” to come along and devastate the global economy, you don’t have to wait any longer. Currently, the price of U.S. oil is sitting at $45.76 a barrel. It has fallen by more than 60 dollars a barrel since June. There is only one other time in history when we have seen anything like this happen before. That was in 2008, just prior to the worst financial crisis since the Great Depression.
But following the financial crisis of 2008, the price of oil rebounded fairly rapidly. As you will see below, there are very strong reasons to believe that it will not happen this time. And the longer the price of oil stays this low, the worse our problems are going to get.
At a price of less than $50 a barrel, it is just a matter of time before we see a huge wave of energy company bankruptcies, massive job losses, a junk bond crash followed by a stock market crash, and a crisis in commodity derivatives unlike anything that we have ever seen before.
So let’s hope that a very unlikely miracle happens and the price of oil rebounds substantially in the months ahead. Because if not, the price of oil is going to absolutely rip the global economy to shreds”…………SD Editors

From The Economic Collapse Blog:

What amazes me is that there are still many economic “experts” in the mainstream media that are proclaiming that the collapse in the price of oil is going to be a good thing for the U.S. economy.

The only precedent that we can compare the current crash to is the oil price collapse of 2008. You can see both crashes on the chart below… 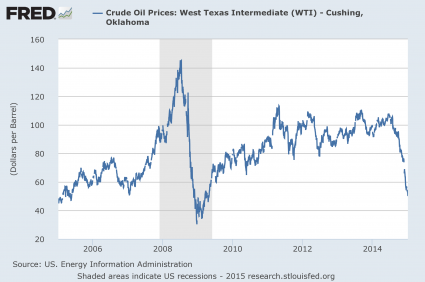 If rapidly falling oil prices are good economic news, that collapse should have pushed the U.S. economy into overdrive.

But that didn’t happen, did it? Instead, we plunged into the deepest recession that we have seen since the Great Depression.

And unless there is a miracle rebound in the price of oil now, we are going to experience something similar this time.

Already, we are seeing oil rigs shut down at a staggering pace. The following is from Bloomberg…

U.S. oil drillers laid down the most rigs in the fourth quarter since 2009. And things are about to get much worse.

The rig count fell by 93 in the three months through Dec. 26, and lost another 17 last week, Baker Hughes Inc. data show. About 200 more will be idled over the next quarter as U.S. oil explorers make good on their promises to curb spending, according to Moody’s Corp.

But that was just the beginning of the carnage. 61 more oil rigs shut down last week alone, and hundreds more are being projected to shut down in the months ahead.

For those that cannot connect the dots, that is going to translate into the loss of large numbers of good paying jobs. Just check out what is happening in Texas…