Another sign the bull market (in stocks) is nearing its end

Analysis: Companies no longer want to buy their own shares, a worrisome sign

CHAPEL HILL, N.C. (MarketWatch) — Here’s another sign the bull market in stocks may be nearing an end: Companies have dramatically reduced share repurchases.

New stock buybacks fell to $23.2 billion in June, the lowest level in a year and a half, according to fund tracker TrimTabs Investment Research. In May, the total was just $24.8 billion, and the monthly average in 2013 was $56 billion.

That’s worrisome, according to TrimTabs CEO David Santschi, because “buyback volume has a high positive correlation with stock prices.” 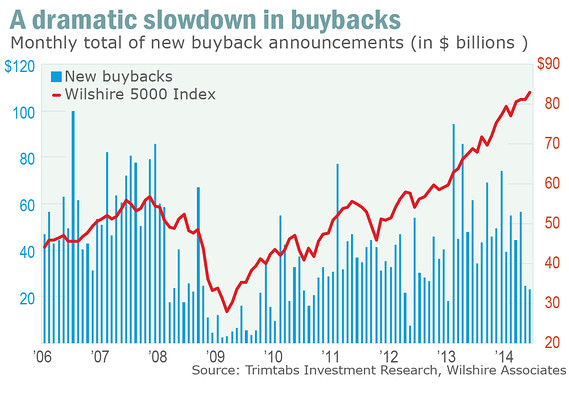 According to Santschi, the correlation coefficient between monthly buyback volume and the stock market’s level, for the period from 2006 until this spring, was 0.61. That’s highly statistically significant.

A high correlation also makes theoretical sense. That’s because, when a company announces a share-repurchase program, it sends a strong signal that its management really thinks its stock is undervalued — so much so that it’s willing to put its money where its mouth is. So it’s bullish for the overall market when lots of companies are simultaneously announcing such programs.

To be sure, the monthly buyback data are quite volatile, so two months of anemic numbers don’t automatically doom the market. Santschi, for one, says that, if the slow pace continues through July, “we will become very concerned.”

Hedge-fund manager Douglas Kass, president of Seabreeze Partners Management, relates the slowdown in buybacks to the recent M&A wave. He says that both activities represent the implicit recognition by corporate managements that their internal operations are unable to produce sufficient revenue growth to maintain their stock prices.

Over the past five years, for example, per-share sales growth for S&P 500 companies has been an annualized 2.4%, lagging far behind the 20% annualized earnings per share growth rate. One of the ways in which corporate managers have been able to extract that much EPS growth out of such anemic sales growth, Kass argues, is through share repurchases.

As their share prices become more and more inflated, however, corporate managers become increasingly reluctant to buy them. The logical thing to do instead is buy up other companies, paying with shares of their inflated stock.

That’s what is happening now, Kass argues: “There’s a baton exchange from buybacks into M&A activity.”

And, as I detailed at greater length in my column earlier this week, past M&A waves have all ended with a precipitous decline in stock prices.