Americans are 40% Poorer than Before the Recession

The Great Recession is officially over, but Americans are still 40% poorer today than they were in 2007, the year before the global financial crisis.

The net worth of American families — the difference between the values of their assets, including homes and investments, and liabilities — fell to $81,400 in 2013, down slightly from $82,300 in 2010, but a long way off the $135,700 in 2007, according to a new report released on Friday by the nonprofit think-tank Pew Research Center in Washington, D.C.

“The Great Recession, fueled by the crises in the housing and financial markets, was universally hard on the net worth of American families,” the report found.

There is also a dramatic disparity in net worth between races. The median net worth of white households was $141,900 in 2013, down 26% since 2007. It declined by 42% to $13,700 over the same period for Hispanic households and fell by 43% to $11,000 for African-American households. One theory for the wealth gap: White households are more likely than other ethnicities to own stocks directly or indirectly through retirement accounts, the Pew report said. 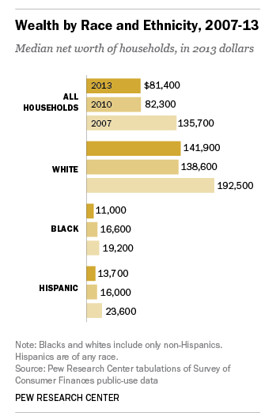 The wealth of most Americans has stood still. In November 2014, the average weekly wage was $853 versus $833 for November 2013, according to the Bureau of Labor Statistics. But things are improving somewhat when it comes to housing. Nationwide, only 8% of borrowers have homes that are underwater as of October 2014, down from a peak of 35%, or 18 million homes, in February 2011, according to Black Knight Financial Services in Jacksonville, Fla., which tracks mortgage performance. But 8% still impacts 4 million homes.

Stagnant wages and rising property prices don’t bode well for first-time buyers without wealthy parents. The homeownership rate for non-Hispanic white households fell to 73.9% in 2013 from 75.3% in 2010, Pew found, and fell to 47.4% in 2013 from 50.6% in 2010 for minorities. It takes an average of 12.5 years to save up a 20% down payment — the usual requirement by banks — with a personal savings rate of 5.6%, according to real-estate firm RealtyTrac.